Do not be disheartened by a small space

The most challenging aspect of our kitchen was making a small space feel large, and having the vision to plan for it when all the previous walls were still there! We created space by moving the island bench towards the larger living area and creating a wider walkway between the back wall and the island. We also maximised storage by having an open pantry that is hidden from view, which allowed us to remove some cupboards in the original plans and have a timber shelf for styling and coffee mugs.

Each of us had a wish list for the kitchen, and we were aligned with the feel we wanted to create which was lucky. My wish list included a butler’s pantry, double door fridge (Electrolux 681L dark stainless steel French door fridge - EHE6899BA), a dishwasher (Electrolux built-under dishwasher with comfortlift - ESF8735RKX) and a wide oven (Electrolux 90cm multifunction pyrolytic oven - EVEP916DSD). Simon wanted a water/ice dispenser in the fridge and a gas cooktop (Electrolux 90cm 5 burner gas cooktop - EHG955BD). We created our non-negotiables from our combined wish list! It’s all in the details

Our kitchen looks out onto the Great Dividing Range, so we had a vision for the kitchen to reflect this view. We opted for green tones for the cabinetry and other finishes which looks stunning against the landscape. We chose muted tones for the hardware and appliance colours to give the space a luxurious feel while blending in a little with the concrete benchtops. We chose Kit Kat sculptural tiles for the splashback, and a timber shelf which also adds some character to the space. Appliances matter more than you think

We spent some time choosing appliances, I think it is one of the things most people get wrong in a kitchen. We actually built the cabinetry around the appliances we wanted, versus finding appliances that worked with the cabinetry. For couples like us with little time, the appliances in a home can give you back time through integrated solutions like apps and customised settings. Appliances should add value to your life, and the aesthetic of the Electrolux products is a natural win for design oriented people, but the technology that backs the user experience is beyond expectation.

Every kitchen needs a highlight

The stand-out features in our kitchen include the Electrolux 681L dark stainless steel French door fridge (EHE6899BA). It’s the most high-tech fridge-freezer we’ve ever seen, you can monitor the temperature from your phone via an app.  We also love our custom benchtops that Simon poured. They add character to the space that a conventional manufactured benchtop couldn’t. 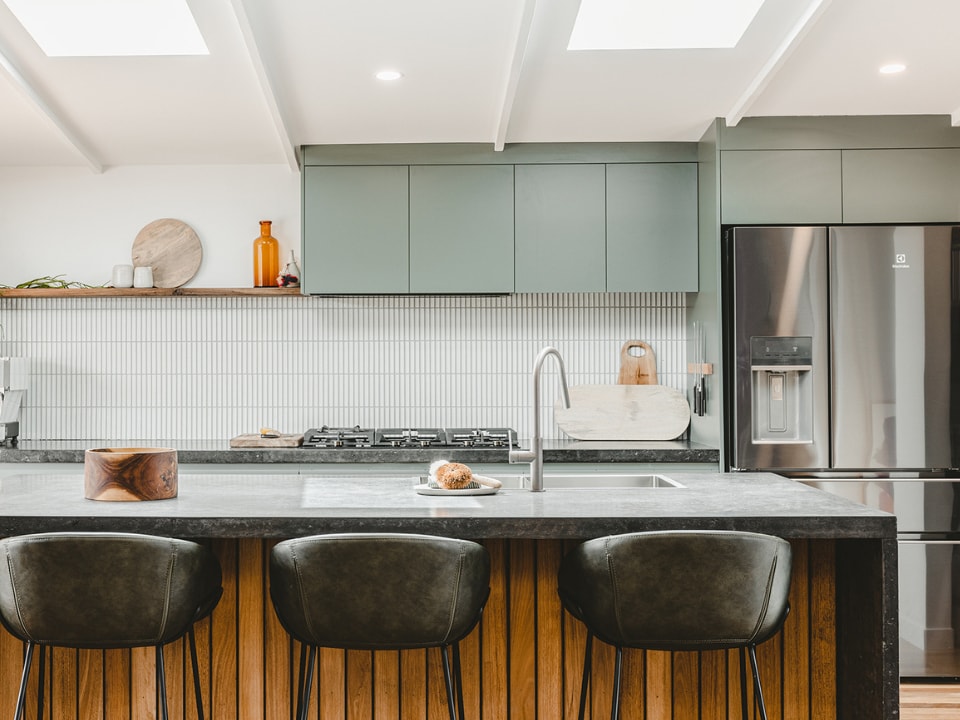 Massimo Mele’s tips for entertaining at home this spring

How to create balance and harmony in the home

Simple tips to make your kitchen a joyful and balance space

How to Bring Joy to Your Laundry with Anna-Carin McNamara